In Ayurvedic medicine, surgery is well developed, scientifically tested, most accurately and proven solution for variety of surgical illnesses. One of the scholar in Ayurveda, Acharya Susruta who is the very first surgeon of the recorded history known as ‘The father of ancient Indian surgery’. He was lived nearly one hundred and fifty years before Hippocrates. 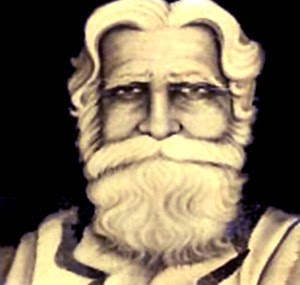 Acharya Susruta examined practical anatomical study by using dead bodies.  The method of study was to immerse the body in water and allow it to decompose followed by dissect and examine of the decomposing body at intervals to study structures, layer by layer, as they got exposed following decomposition. He told “Any one, who wishes to acquire a thorough knowledge of anatomy, must prepare a dead body and carefully observe and examine all its parts”.


According to his examinations, he described different layers of body such as skin, tissues, muscles, nerves, blood vessels, bones, bone marrows and also very important special spots in body known as ‘Marma’.


He introduced surgical instruments into two, yantra (blunt) and shastra (sharp). The yantra were further divided into one hundred and one instruments and classified into six types and twenty types of shastra and also defined eight kinds of surgical techniques known as Shastra karma. He taught the surgical skills to his students on various experimental modules, for instance, incision on vegetables like watermelon, gourd, cucumber etc. 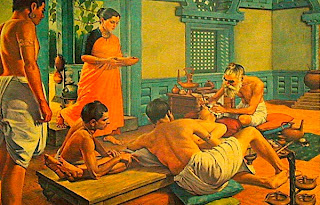 His famous treatise Susruta Samhitha is the oldest text book of surgery. It contains descriptions about anatomical body, surgical wounds, Para surgical methods, Pre-operative, Operation proper, Post-operative procedures and surgeries including with surgical methods and instruments in detail and plastic surgeries also. According to that text, he used anesthetic and anti-aesthetic drugs for surgeries.
Posted by Ayurvedic SL at 11:12 AM

Ayurveda is the ancient natural medical system. It is a way to a healthy & long life. It means "The science of Life". 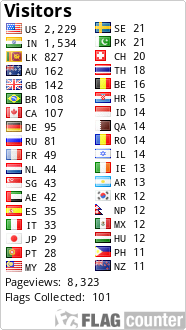